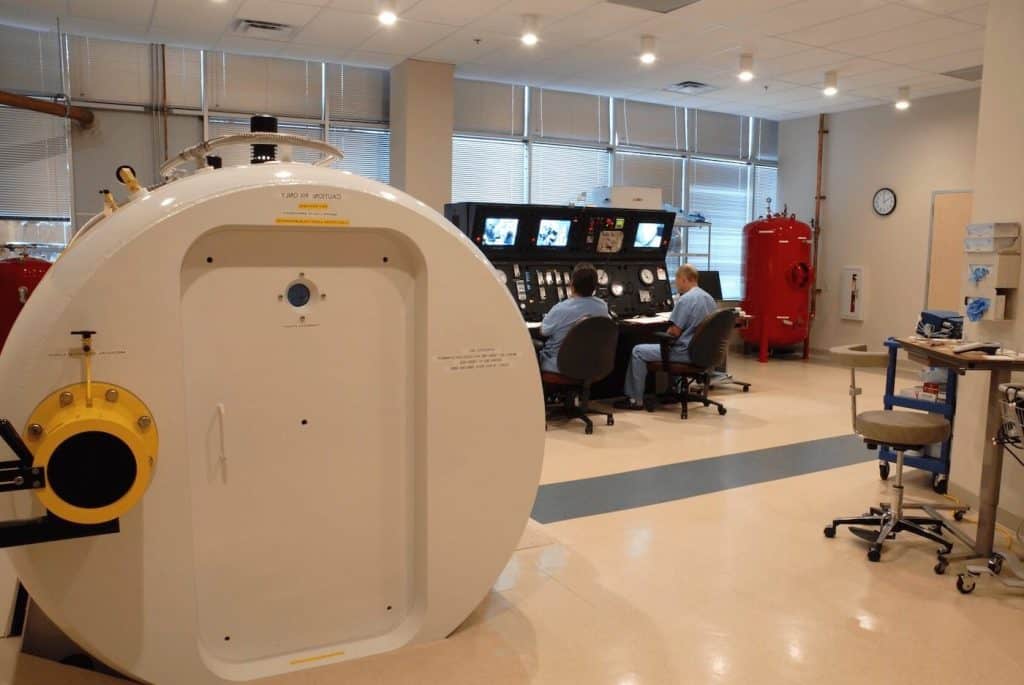 What is Hyperbaric Oxygen Therapy? HBOT is a prescribed treatment approved by the FDA and AMA in which a patient breathes 100% medical grade oxygen while the pressure of the treatment chamber is increased to a point higher than sea level pressure. This aides to speed and enhance the body’s natural ability to heal.  HBOT is a safe, painless, non-invasive alternative and/or adjunctive therapy.  Generally speaking, no serious complications are associated with Hyperbaric Oxygen Therapy, but some complications or side effects may be related to the primary condition treated.

Ear Barotrauma – Difficulty with clearing the ears causes “popping” and can cause mild to moderate pain.  Middle ear barotrauma is the most common side effect of HBOT therapy.  The patient prevents barotrauma by clearing their ears (equilibrating) during the chamber descent and ascent.  A number of auto inflation maneuvers can be used, or, tympanotomy tubes can be used for those who cannot auto inflate.

Sinus Pain, Upper Respiratory Infections and Chronic Sinusitis – Sinus squeeze is seen less frequently than middle ear barotrauma.  Antihistamines, decongestants, and/or nasal spray may be used prior to entering the chamber.  With slow compression and decompression, usually there are no problems.

Myopia and Cataract – Myopia is a reversible complication of repeated exposure to HBOT.  When progressive myopia does occur during a series of HBOT treatments, after completion of treatments, the visual acuity changes reverse completely.  Acceleration of growth in existing cataracts is a complication of chronic long-term exposure at pressures over 2 ATA.  Published reports as well as extensive clinical experience indicate that new cataracts do not develop within the series of 30 to 50 treatments that are commonly used in the USA.


Pulmonary – Pulmonary and neurological manifestations of oxygen poisoning are often cited as major concerns with HBOT.  Oxygen tolerance limits that avoid these manifestations are well defined for continuous exposure in normal people.  Pulmonary symptoms are not produced by daily exposure to oxygen at 2.0 or 2.4 ATA for 2 or 1.5 hours respectively. The incidence of oxygen convulsions when using similar exposure is about 1 per 10,000 patient treatments. Even when oxygen convulsions do occur, there are no residual effects if mechanical trauma can be avoided.  Patients with airway obstruction have an increased risk for pulmonary barotrauma during decompression. Pulmonary barotrauma during decompression is rare.

Untreated Pneumothorax – The only absolute contraindication for HBOT is untreated pneumothorax. Surgical relief of the pneumothorax before HBOT treatment, if possible, removes the obstacle to treatment.  A Chest x-ray may be necessary to rule out pneumothorax, if a patient’s medical history includes: 1) A history of spontaneous pneumothorax; 2) A history of thoracic surgery; or 3) A history of chest injury.  Pneumothorax is a complication, which can be caused by breath holding during decompression.

Claustrophobia – Claustrophobia, which appears to be present in about 2% of the general population, may cause some degree of confinement anxiety.  A mild sedative can be prescribed for those patients with anxiety.

Dental – All dental work, root canals, and fillings must be complete.  Dental barotrauma is otherwise a possibility.  Patients should not receive treatment if they have temporary dental caps or unfinished root canals.

IBUM (International Board of Undersea Medicine)

NBDHMT (National Board of Diving and Hyperbaric Medical Technology)

Our Hyperbaric Chamber is fantastic! Better than we had hoped for!

In the Tekna Chamber, our patients consistently comment how comfortable their dives are.

All of our patients love the Tekna chamber. It is so comfortable and roomy.

We have been extremely pleased with the quality, workmanship, and reliability of our two Model 6000 Multiplace Chambers.

The Hybrid 4000 is the nicest Monoplace Chamber I have ever seen.

Our chamber is unstoppable. It’s in it’s 15th year of operation, and we’ve never had a down day.

The Tekna 4000 is incredibly easy to use. Learning how to use it took no effort at all. Very nice!

The Tekna Chamber is operator friendly and has all the safety bells and whistles.

Our chamber was built and installed in 2002. It’s a workhorse. We’ve never had any problems.

The patients think the Tekna Chamber looks cool and they love the roominess.

Since our first order of three Monoplace Chambers in 2000 we have purchased over $1 Million dollars of HBOT Systems from Tekna.

The six person Multiplace system that you build for us in 2009 continues to be reliable and cost effective to operate.