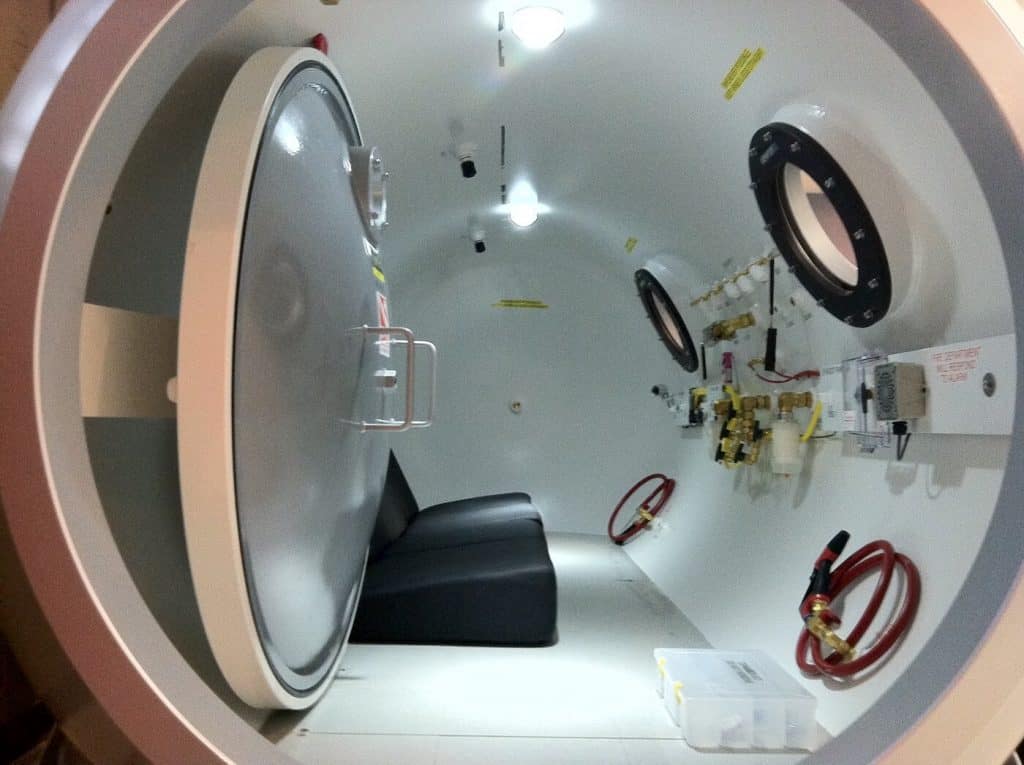 The Science Behind Hyperbaric Medicine

Hyperbaric Oxygen Therapy, also known as HBOT, is a medical treatment that delivers 100% oxygen to a patient’s pulmonary system while they are within a pressurized chamber.  The patient is breathing oxygen at levels far greater than the 21% which is found at a normal sea level atmosphere.

Hyperbaric Therapy is based on two basic laws of physics.

“Henry’s Law” states that the amount of a gas dissolved in a liquid is in proportion to the pressure of the gas above the liquid, provided that no chemical action occurs.

“Boyle’s Law” states that at constant temperature, the volume and the pressure of a gas are inversely proportional.

This means a gas will compress proportionately to the amount of pressure exerted on it.  Using these laws Oxygen Therapy allows more oxygen to be delivered to the tissues and organs.

This increase of the partial pressure of oxygen at the cellular level  can accelerate the healing processes and assists in the recovery from numerous indications.

Side effects are minimal and rarely last very long. Hyperbaric Medicine is not  a cure for most indications but it has demonstrated to increase immune capabilities, assisting patients with problems ranging from chronic wounds to complex disabilities and neurological impairment. 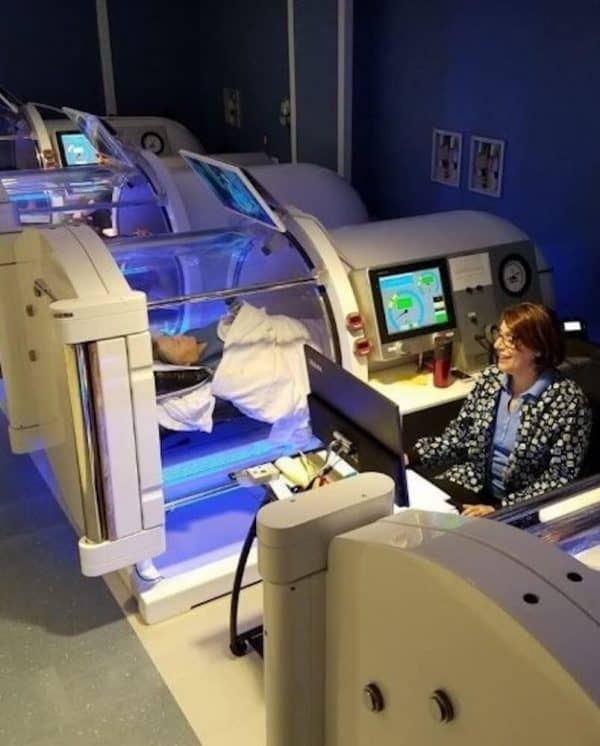 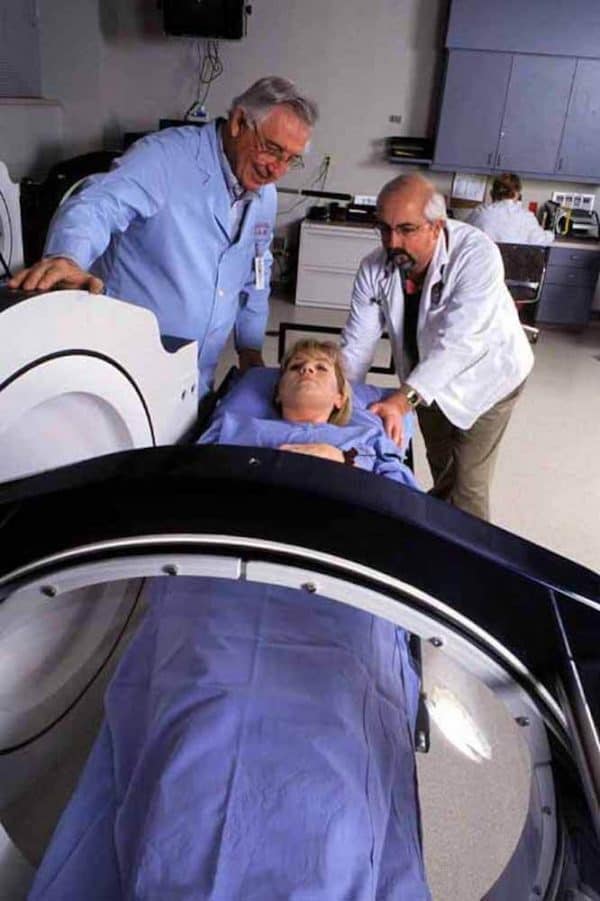 This medical treatment that can be traced back to the 1600’s.

In 1662, the first Hyperbaric Chamber was built and operated by a British clergyman named Henshaw. He erected a structure titled, the Domicilium, that was used to treat a variety of conditions.

In 1878, Paul Bert, a French physiologist, discovered the link between decompression sickness and nitrogen bubbles in the body. Bert later identified that the pain could be ameliorated with recompression.

The concept of treating patients under pressurized conditions was continued by the French surgeon Fontaine, who later built a pressurized mobile operating room in 1879. Fontaine found that inhaled nitrous oxide had a greater potency under pressure, in addition to his patients having improved oxygenation.

In the early 1900’s Dr. Orville Cunningham, a professor of anesthesia, observed that people with particular heart diseases improved better when they lived closer to sea level than those living at higher altitudes.

He treated a colleague who was suffering from influenza and was near death due to lung restriction. His resounding success led him to develop what was known as the “Steel Ball Hospital” located along the shore of Lake Erie. The six story structure was erected in 1928 and was 64 feet in diameter. The hospital could reach 3 atmospheres absolute ( 44.1 PSI ). Unfortunately, due to the depressed financial status of the economy, it was deconstructed during in 1942 for scrap.

Hyperbaric Chambers were later developed by the military in the 1940’s to treat deep-sea divers who suffered from decompression sickness.

In the 1950’s, physicians first employed Hyperbaric Medicine during heart and lung surgery, which led to its use for carbon monoxide poisoning in the 1960’s. Since then, over 10,000 clinical trials and case studies have been completed for numerous other health-related applications with the vast majority of results reporting resounding success.

The UHMS defines Hyperbaric Oxygen Therapy (HBOT) as an intervention in which an individual breathes near 100% oxygen intermittently while inside a hyperbaric chamber that is pressurized to greater than sea level pressure (1 atmosphere absolute, or ATA).

For clinical purposes, the pressure must equal or exceed 1.4 ATA while breathing near 100% oxygen.

In certain circumstances it represents the primary treatment modality while in others it is an adjunct to surgical or pharmacologic interventions.

Monoplace Hyperbaric Oxygen Therapy Chambers accommodates a single patient; the entire chamber is pressurized with near 100% oxygen, and the patient breathes the ambient chamber oxygen directly.

Multiplace Chambers are pressurized with compressed air while the patients breathe near 100% oxygen via masks, head hoods, or endotracheal tubes.

According to the UHMS definition and the determination of The Centers for Medicare and Medicaid Services (CMS) and other third party carriers, breathing medical grade 100% oxygen at 1 atmosphere of pressure or exposing isolated parts of the body to 100% oxygen does not constitute Hyperbaric oxygen therapy .

The Hyperbaric patient must receive the oxygen by inhalation within a pressurized chamber. Current information indicates that pressurization should be to 1.4 ATA or higher. 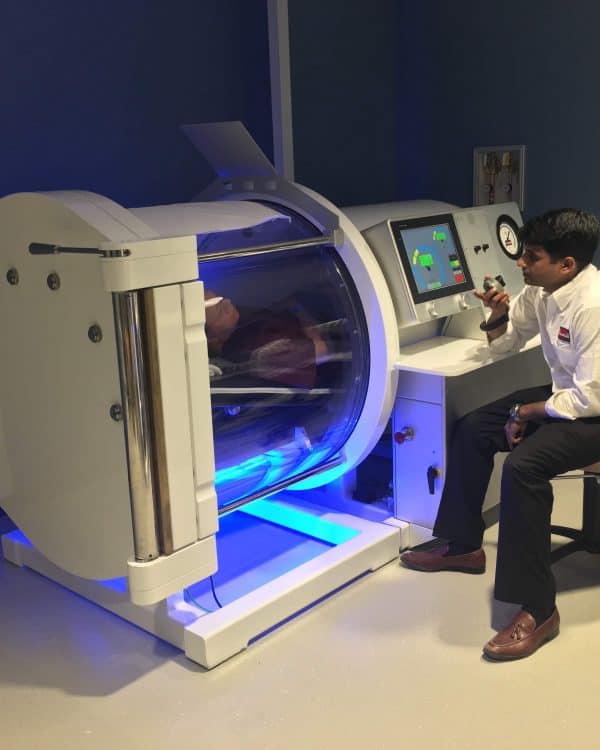 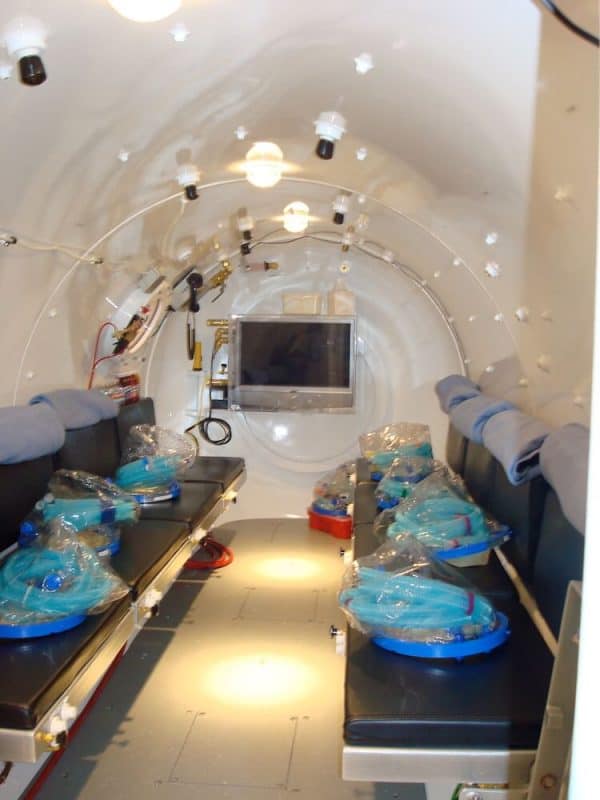 There are currently 14 approved indications in the USA.

What is not a Hyperbaric Chamber?

Topical oxygen, or Topox, is administered through a small chamber that is placed over an extremity and pressurized with oxygen. The patient does not breathe the oxygen, nor is the remainder of the body pressurized. Therefore, the patient cannot benefit from most of the positive effects of Hyperbaric Medicine, which are systemic or occur at a level deeper than topical oxygen can penetrate (see Hyperbaric Physics and Physiology section below). Topox is based on the concept that oxygen diffuses through tissue at a depth of 30-50 microns. [4] This method does not treat DCS, arterial gas emboli (AGE), or carbon monoxide (CO) poisoning.

With the Topox design a pressure differential must be created between the machine and open atmosphere to compress the machine. In order to keep the extremity from being pushed out of the pressurized machine, the cuff of the box must fit very tightly around the extremity, thereby creating a tourniquet like effect. Topox is not covered by insurance, nor is it endorsed by the journal Diabetes Care for the treatment of foot ulcers.

The other type of chamber is the portable Mild Hyperbaric Chamber. These soft vessels can be pressurized to 1.2-1.5 atmospheres absolute (ATA). They are only approved by the FDA for the treatment of altitude illness. Many of these High Altitude Illness bags are being wrongly sold as “Mild Hyperbaric Chambers” for unapproved off-label indications. 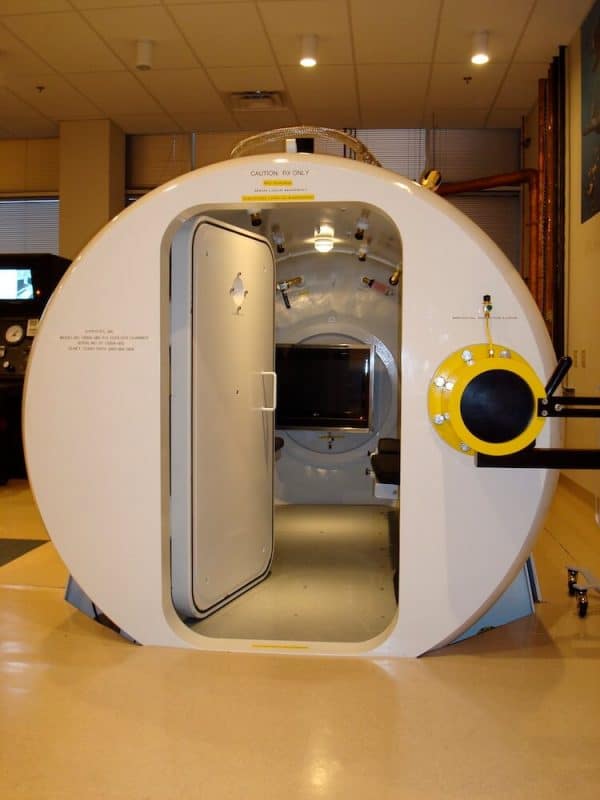 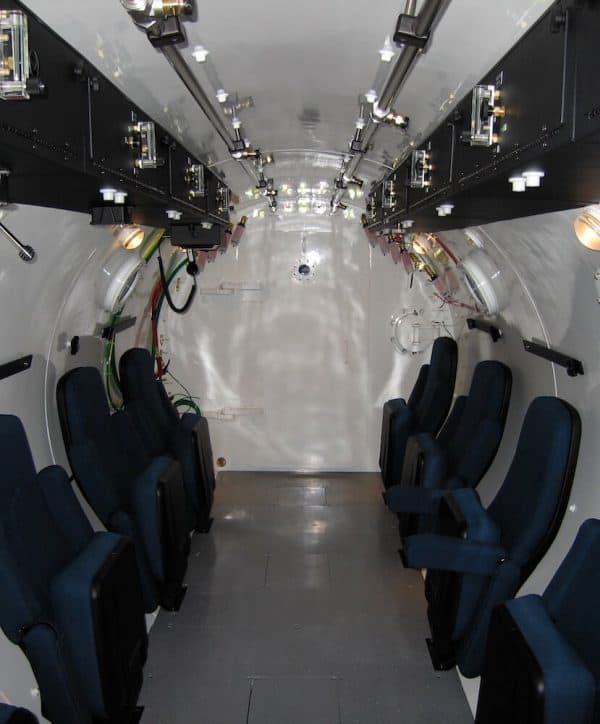 Physics and Physiology of hyperbaric medicine

The physics behind Hyperbaric Oxygen Therapy (HBOT) lies within the ideal gas laws.

The application of Boyle’s law (p1 v1 = p2 v2) is seen in many aspects of Hyperbaric Medicine. This can be useful with embolic phenomena such as decompression sickness (DCS) or arterial gas emboli (AGE). As the pressure is increased, the volume of the concerning bubbles decreases. This also becomes important with chamber decompression; if a patient holds her breath, the volume of the gas trapped in the lungs over expands and may cause a pneumothorax.

Charles law ([p1 v1]/T1 = [p2 v2]/T2) explains the temperature increase when the vessel is pressurized and the decrease in temperature with depressurization. This is important to remember when treating children or patients who are very sick or are intubated.

Henry’s law states that the amount of gas dissolved in a liquid is equal to the partial pressure of the gas exerted on the surface of the liquid. By increasing the atmospheric pressure in the chamber, more oxygen can be dissolved into the plasma than would be seen at surface pressure.

The clinician must be able to calculate how much oxygen a patient is receiving. In order to standardize this amount, atmospheres absolute (ATA) are used. This can be calculated from the percentage of oxygen in the gas mixture (usually 100% in Oxygen Therapy; 21% if using air) and multiplied by the pressure. The pressure is expressed in feet of seawater , which is the pressure experienced if one were descending to that depth while in seawater. Depth and pressure can be measured in many ways. Some common conversions are 1 atmosphere = 33 feet of seawater = 10 meters of sea water = 14.7 pounds per square inch (psi) = 1.01 bar.

Hyperbaric oxygen therapy describes a person breathing 100 percent oxygen at a pressure greater than sea level for a prescribed amount of time—usually 60 to 90 minutes.

Atmospheric Pressure – The air we breathe is made up of 20.9 percent oxygen, 79 percent nitrogen, and 0.1 percent inert gases. Normal air exerts pressure because it has weight and this weight is pulled toward the earth’s center of gravity. The pressure experienced is expressed as atmospheric pressure. Atmospheric pressure at sea level is 14.7 pounds per square inch (psi).

Atmospheres Absolute  (ATA) – ATA refers to gauge pressure that is true regardless of location. This way, a standard depth can be reached whether located above or below sea level.

There are various terms for measuring pressure. HBO therapy uses pressure greater than that found at the earth’s surface at sea level, which is called hyperbaric pressure. The terms or units used to express hyperbaric pressure include millimeters or inches of mercury (mmHg, inHg), pounds per square inch (psi), feet or meters of sea water (fsw, msw), and atmospheres absolute (ATA). 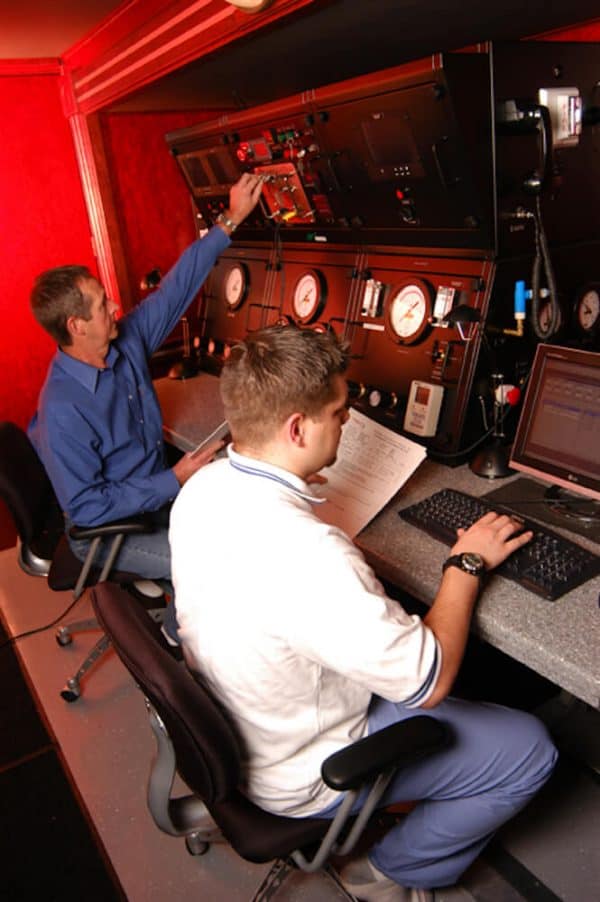